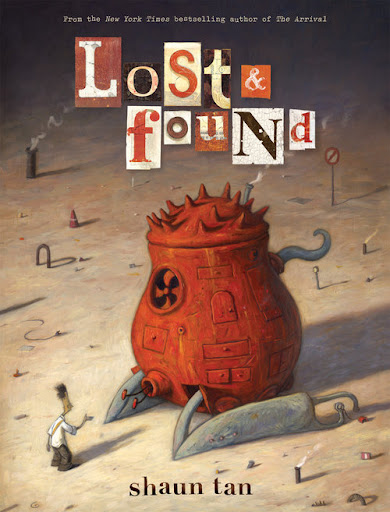 I love Shaun Tan’s work! It is always beautiful and moving, even without words. This book holds three short stories, the first of which is “The Red Tree”. This is a story without a plot but with a very important message. Utilizing leaves, monsters, storms, we follow a nameless red-headed girl through some difficult moments, moments that seem lonely, dark, and hopeless…much how life can often be. But there is always a ray of hope, represented in this book by a bright red flower shimmering in a dark room. Tan uses landscapes to portray the little redheaded girl’s feelings of displacement, isolation, and loneliness, such as sitting alone in a bottle that is being rained in, water up to her knees and an old-fashioned scuba helmet on her head. But, no matter how dark it is, there always that bright spot that we hope for, pray for. Somewhere.

The next story in this compilation is “The Lost Thing”, a simple story about a young man who finds a bizarre creature at the beach that just seems, in his words, “sad and lost”. Unable to find its owner, he takes it to a friend, who proclaims that some things don’t belong to anyone and are just lost. He then takes it home with him, much to his parents’ dismay and demands for him to take it away again. As he tries to utilize a governmental solution, the young man is given a card and directed away with his lost thing, to a place where other lost things have found a home. They don’t look like belong there, none of them do, but at least they seem happy.

We may not always fit in perfectly but if we can find happiness, it is just where we should be.

The last story in this book was actually not written by Shaun Tan but by John Marsden and is entitled “The Rabbits”. It starts on a beautiful desert plain, horizoned by painted hills, and with the words, “The rabbits came many grandparents ago.” Then proceeds a tale of desolation and destruction as the rabbits take over and turn the once-beautiful plain lands into a barren, brown wasteland where nothing will grow and the armadillos have been wiped out, their children stolen.

This story reflects the displacement and near-extinction of native peoples such as the American Indians and the aborigines of Australia by the sheer numbers and force of settlers and colonists. Marsden has done so with simple language and a powerful message echoed by Tan’s illustrations of the rabbits has a vastly technological race that overpowers the armadillos whose home they have invaded. And the story ends with a simple yet aching question.

“Who will save us from the rabbits?”

Tan has always had the ability to produce powerful, moving stories, sometimes even without a single word inserted. Lost and Found is no different in its simple writing, complex ideas, and striking illustrations. Congratulations, Tan! You have won my heart all over again.